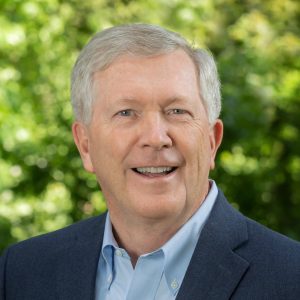 Kevin was elected First Selectman of New Canaan in November 2017 and was re-elected for a second term in 2019. A resident of New Canaan since 1981, Kevin was previously a member of the Town Council from 2013 to 2017.

Kevin was born and raised in Pittsfield, Massachusetts and graduated from Pittsfield High School. He received his undergraduate degree with a major in Government from Georgetown University and his J.D. degree from Boston College Law School. Kevin had a 35-year career as a corporate attorney in Chicago and New York City. He started his legal career as an attorney with the U.S. Securities & Exchange Commission in Washington, DC. and worked for a succession of investment banks as general counsel or senior attorney until retiring in 2009 from Merrill Lynch.

Kevin is married to Miriam (“Mim”) Stapleton Moynihan. They have two adult children and five grandchildren, who live in Riverside and Cos Cob.