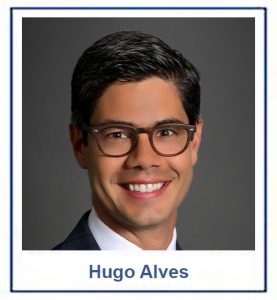 Hugo has been a proud resident of New Canaan for the past 11 years. From the first time he and his wife, Maria, roamed the village they were convinced New Canaan would be the perfect place to raise their family. They’ve renovated/built two homes in town and have three daughters, ages 7 ,5 and 2 who attend West School and Playland Nursery. Born in Portugal, Hugo and his parents immigrated to Naugatuck, CT in 1980, later moving next door to Beacon Falls, CT where he grew up. Obtaining citizenship at age 6, Hugo couldn’t wait to officially register as a Republican when he turned 18. He hasn’t wavered since.

After graduating from the University of Connecticut in 2000 with a degree in Economics, Hugo spent the next few years working in finance, primarily in the hedge fund space where he and Maria met. In 2009 he decided to change gears and follow his passion to launch and grow a successful personal financial planning practice. He combines his financial acumen with his genuine interest in helping people to ensure that his clients become clear in their objectives, develop a road map, and then execute that plan to fruition. Hugo has been an active leader from an early age, serving as student body president his senior year at Masuk High School, then moving on to various leadership positions on campus at UConn and within his fraternity, Pi Kappa Alpha. As a leader in the financial services industry, Hugo takes annual trips to Washington, D.C. where he serves as a government relations delegate and industry advocate. His team schedules meetings with our state representatives so Hugo can be a voice and activist in the legislation that impacts the residents of CT and US at large. Locally, he is a member of St Aloysius Parish and serves on the investment committee for the New Canaan Museum & Historical Society. Hugo was recently elected to their Board of Governors.

Hugo’s mission is to bring renewed energy and focus to the New Canaan Board of Education. He believes we need to embrace fresh, new ideas while maintaining the values that attracted all of us to this community.  We need collaboration, engagement and transparency between the administration, the board, and the constituents we serve.  Important decisions require open communication, oversight, and fiscal common sense. The parents, grandparents and children of New Canaan expect the best. They deserve the best.