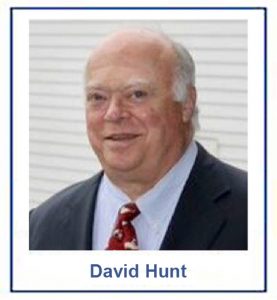 I was born and raised in Vermillion, South Dakota. I attended Rice University for one year, then transferred to and graduated from the University of Iowa with a degree in Mathematics. I worked for 36 years as an actuary for Hewitt Associates, a management consulting firm. My role in the firm was in the pension area primarily, managing the actuarial practice on the East Coast. I also served as Vice Chairman of the Executive Committee. Following the firm’s IPO in 2002, I retired from the public company, but remained in the predecessor partnership as its Chairman to sell off our real estate holdings and to administer the stock holdings of the former partners. While employed, I was a Fellow of the Society of Actuaries and a member of the American Academy of Actuaries.

My wife Sara and I have been in New Canaan since 1976. We have two children, both married, whose entire elementary and secondary education was in the New Canaan school system. Daughter Mary Beirne (Rewcastle) lives in Darien, with her husband David and our 14 year-old granddaughter Sara. Our son Lee lives in Asheville, NC with his wife Amanda. They have two girls, 8 year old Laura, and 6 year old Maddie.

As to community activities, when the kids were in high school in the early 90’s, Sara and I were co-presidents of the New Canaan High School Sports Council, an all sports booster club. I was also asked then to be a part of a formal committee to review the open campus program at the high school, which was a somewhat controversial subject at the time. I served on the board of the United Way of New Canaan 6 years in the 90’s, then again for 7 years in this decade, during two of which I was the Chair.

With the dissolution of the United Way as of 6/30/09, and the shifting of its endeavors to the New Canaan Community Foundation, I joined that board as a director and have served as its President, completing my last term in 2015. I was on the Board of Directors of Inspirica (formerly called St. Luke’s Lifeworks) in Stamford, serving also on the Finance Committee. I am also on the board of the Visiting Nurse and Hospice of Fairfield County, where I am on the Audit and Advancement committees, and serve on the board and am Treasurer of the Senior Center in New Canaan. I am on the board of Silver Hill Hospital. I recently also joined the board of the New Canaan Land Trust.

As to personal activities, I am a CERT volunteer in New Canaan, and have also served on the Senior Health and Housing Task Force in New Canaan, and as chair of the Charter Revision Commission in 2016. Before the Red Cross ended the program, I was a driver for them, taking residents to out of town medical appointments. For 8 years, until 2012, I edited the monthly newsletter for the Senior Men’s Club, and now am the Treasurer there. I am also a member of the New Canaan Beautification League, taking care of a triangle. I also volunteered at the New Canaan Inn leading a discussion of current events about quarterly until the activity was recently paused. I like to travel, enjoy photography, play bridge, and am currently doing a good deal of family genealogy research. I am a sports fan, especially football.