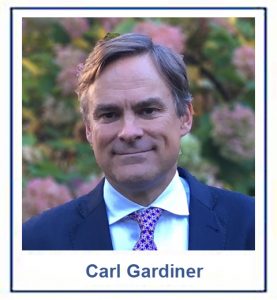 Carl Gardiner and his wife Polly have lived in New Canaan for 16 years and are the parents of three boys—Sam, Hugh and Auggie—who have collectively spent nearly 25 years in the New Canaan Public School system.  Carl has worked in the investment industry for over 25 years, including as an analyst and portfolio manager at two long/short hedge funds and a value investment boutique, Schafer Cullen Capital Management which grew from $4bn to $20bn in assets during his tenure.  Earlier in his career, he advised corporations in capital raising and mergers and acquisitions as an investment banker at Merrill Lynch, where he completed many landmark transactions including the privatization of France Telecom, strategic sale of Telkom South Africa and IPO of AT&T Wireless.  He holds a B.A. with High Honors from the University of Virginia (Government), where he was inducted into Phi Beta Kappa, and a M.A. from Johns Hopkins University (Economics).  Carl is a CFA charterholder and an Accredited Investment Fiduciary.